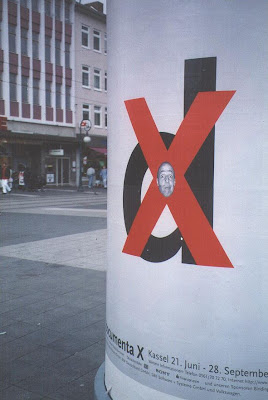 On all posters advertising the Documenta “X” exhibition, I placed stickers with an image of my grimacing face exactly in the centre of the “X”. Two days later, while I was still in Kassel, someone told me that some uninformed people who had seen the stickers thought it was the curator face, of the exhibition. 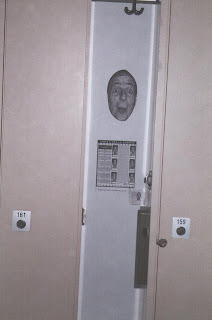 On 23 June 1997 at 11.30 AM I put a big sticker of my grimacing face inside a public locker with a text attached. The locker was then closed. I kept the key of the locker as evidence of my actions. 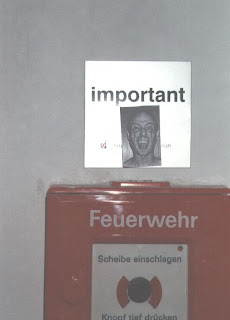 I thought it was relevant to place a small sticker above every label titled “IMPORTANT”, located in all areas of the exhibition. How you interpret this
is your decision. I cant’ do everything. Can I. 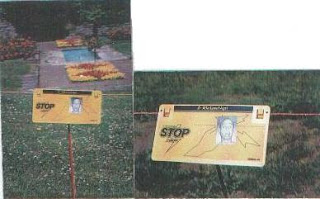 One of the main intentions of the invited artist Carl Michael Von Hausswolff was to gauge the reaction of visitors to his potentially dangerous installation. I thought it would be right to place one my stickers over every “STOP” sign along the electric fence around his installation.

In a rough cavity of the wall close to the entrance of the main hall dedicated to Gerahard Richter, I placed another of my “ Grimacing Face “, stickers. I can now claim to have exhibited alongside the great German artist. 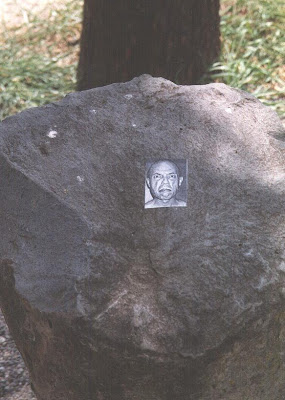 On the top of both basalt stones beside the two oak planted by Beuys, just in front the Fridericianum Museum, I stuck a small sticker face. The funny thing is that a lot of people continued to sat on them ignoring the small face flatten under them ass. 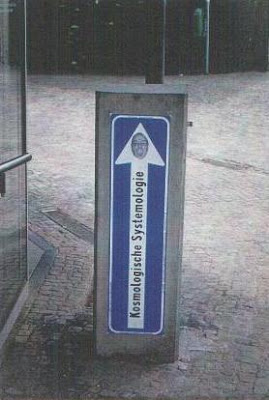 On January 30th 1999 in Bologna, I was talking to someone who wanted to arrange a video interview with me, concerning my urban stickers. Our conversation was interrupted by Hans Hermann who said he needed to speak to me immediately. He began to protest at length about some of the stickers I had placed at the Documenta X exbition in Kassel. I had put one of the my face stickers on his “Kosmologische systemologie” arrow pointing. After a brief explanation to which he probably wasn’t even listening to, he suddenly said to me “This time I win!… because on my stickers I wrote io and my name “, He was to referring the fact that at the Bologna ARTEFIERA, I had placed my stickers next to his stickers unaware that he was the same artist of the arrows in Kassel.. I replied very calmly “ Of course you win!… I don’t do what I do to win, I’m absolutely sure of losing”.
Pino Boresta